MAX:
Festivals dominate my relationship to dance. I don’t live in Paris, New York or Berlin (I live in the periphery, in Helsinki), so often the most interesting performances are ‘just’ on tour, visiting a festival. When you add to this the fact that all my public talks on dance are guest lectures on festivals, I must say that festivals are very important for me. I feel that dance in my life is just about festivals.

The atmosphere is special on festivals. Is there an analogy to visual art biennales in this respect? Some works do just not work in the Venice Biennale, but crave for a cozy gallery – or public space.

BOŽENA:
As we talk about festivals, I must begin by saying that I started to write about dance because of a festival. It takes place in my hometown (Vilnius, Lithuania). The annual contemporary dance festival New Baltic Dance has showed not just the diversity of dance but it has also presented other ways of working with dance. It has, for example, stimulated the audience by discussing criticism and the analysis of dance through the project Šokis žodžiu – ne[w]kritika (Dance Through Word – Not[new]criticism). This project aims to develop new ways of understanding, writing and talking about dance, taking into account the diversity of media used in dance performances and current conceptions of what a performance is. We seek to find new forms of interpretation. In this project we have been looking not only at criticism, but also political analysis, philosophy, etc. The project is a Lithuanian one, but a part of a larger Writing Movement project in the Nordic and Baltic countries.

The dancers and their bodies provoke thoughts about social and political problems, and the festival stimulates verbal discussion about them. The diverse nature of dance is visible following the fact that the audience can, at festivals, see many performances during one day. So it can begin to compare them, especially when the performances share a theme.

On the other hand, we should mention that sometimes it is hard to see performers or performances, choreographers or dancers as singular in this kind of context, as too many performances are shown during a very short period of time. And, as you mentioned, following the fact that some of the visiting acts are really fascinating, many performances drop in into a periphery in the festival context. 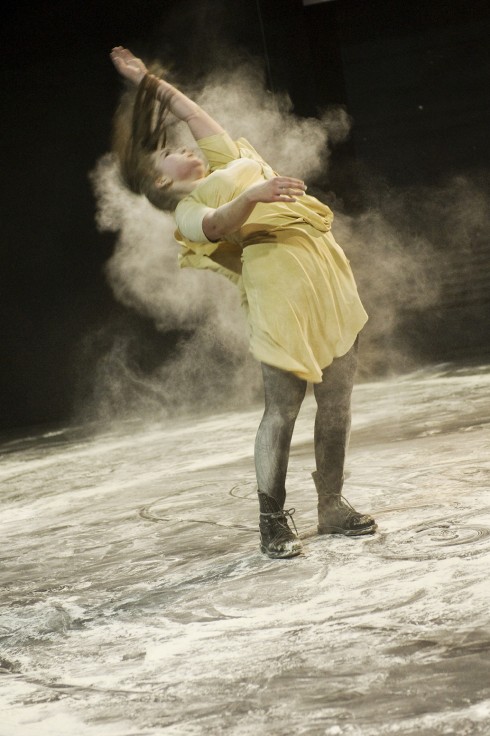 As I am very interested in the way dance performances and their moving bodies can talk about social and political issues, and how this influences the audience, I should say, also, that this does not always work well enough on festivals. I am talking about performances where we see moving bodies engage in explicitly political dialogue, and I mean performances where politics is more important than choreography, dramaturgy, artistry, etc. For example… take the performance Sõp rus est (about friendship, rus – Russian / est – Estonian), by Svetlana Grigorjeva (Estonia), that was presented at New Baltic Dance 2012, a piece that touched upon the problems of the Russian minority in Estonia and the relationship of Russia and Estonia. Grigorjeva sees this relationship analogous to a football game. It is based on a conception of “Realpolitik”. The concept was used in the early 19th century by Ludwig von Rochau. It is a perspective on politics that focuses on power, practical and material factors rather than morals, ideals and principles. In this way “realpolitik“ is related to the philosophy of political realism, which is rooted in the pursuit, application and possession of power. As I saw it, the audience, which consisted mostly of dance professionals, was not very interested in the piece. There were empty seats. Also in Lithuania the relationship with Russia and the Russian minority is a very sensitive issue. At the same festival we saw Austėja Vilkaitytė‘s Lietuva brangi (Dear Lithuania), a piece about romantic patriotism and the romantic identity of the Lithuanian nation. It was based upon 19th and early 20th century poetry. It was about the way we Lithuanians read the past, and of course there was a dose of sarcasm in it. Here the interest was really high. Especially the young professional audience loved it, even if it was a parody. But in a way, if the audience would not have known anything about the political history of Lithuania, it could not have understood the work. It felt like a student homework. Can we make the conclusion that the audience was not so interested in the political topics, minorities and our relationship with our neighbor, but more in just national identity? 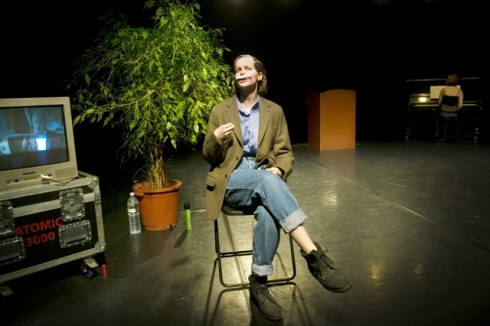 Another year at the New Baltic Dance, 2014, there was a performance by choreographers Marius Pinigis and Mantas Stabačinskas called ID:D&G. They were analyzing Lithuanian national identity, and using visual signs of contemporary life, I mean fashion and modeling, topics that are fashionable for dance performances these days. And the same year at the same festival there was a performance by choreographers Larysa Venedyktova, Olga Komisar and Oleksandr Lebediev (TanzLaboratorium, Ukraine) called The Cruelty of Possibility. Looking at the context, I mean the political events in Ukraine, this could have been interpreted to be quite a cynical political decision. We are interested in the political situation in Ukraine, and there is a lot of solidarity in the air, but the audience was here more professional (as it was smaller) than the audience of ID:D&G. This was due to the concept of the latter performance. The Lithuanians were more playful. It shows also how we Lithuanians are very interested in ourself. 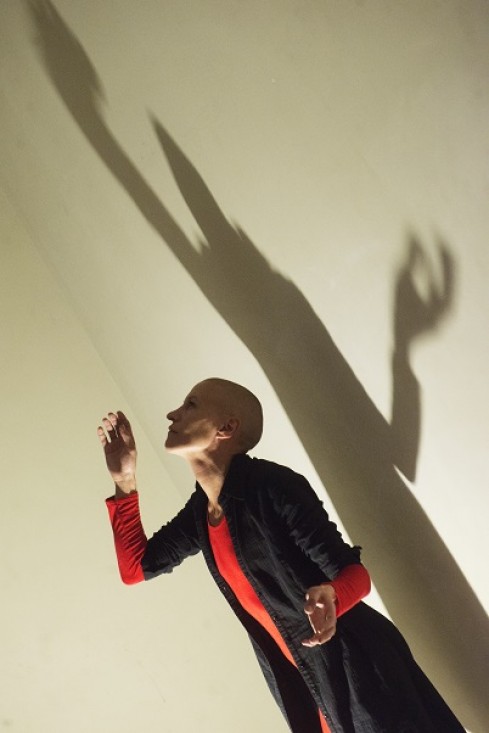 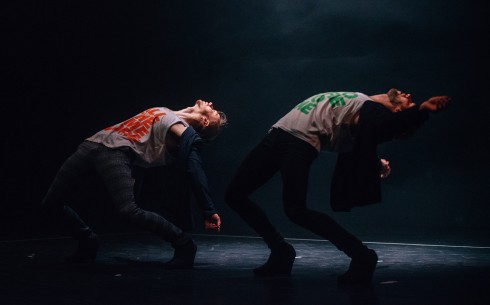 Is all this due to the context? I am talking about the fact that very few performances that engage in explicitly political dialogue are actually shown on dance festivals. I don‘t believe this differs very much from the situation in theatre festivals or visual art biennales. But, I believe that the difference is in the consequences, the fact that the performances I am talking about were somehow transformed when they were performed at a festival. The concept was the same, but…

How do dance festivals differ from theatre festivals or visual art biennales in your opinion? Do these events have the same kind of consequences?

MAX:
I too believe I began writing about performing arts after visiting my first good festival. This is why I feel, even stronger now after your thoughts, that young critics and scholars should be able to not just see festivals in their own home town but also to travel to other cities to do it.

There is something I have really liked on festivals. It is the way a well-curated festival can intensify performances. I remember a great year at Homo Alibi Theatre Festival (Riga) when the focus was totally on object theatre. When you see many performances that are somewhat connected by a shared theme or certain methods of performing and as you do this during a couple of very intensive days, I think you gain more focus on the substance. A feeling of depth grows. You also have a festival club with talks and panel discussions, a booklet with text. Sometimes this kind of a holistic event brings out unprecedented critical points of view. I believe, by the way, that actually your Vilnius-based New Baltic Dance is one of the most inspiring festivals I have visited, although, on my visit, last year, I saw only two pieces.

Thinking about festivals and biennales in other arts, I don‘t believe dance festivals are that different. Well, politics might be more present in the visual arts – although politics is such a trendy issue in visual arts that you can nowadays even see a lot of political kitsch. Maybe one important difference, though, comes to my mind. Following the more static nature of visual and conceptual object art, and the fact that they are exhibited for e.g. a whole summer, they don‘t provide community experiences on the same level as dance festivals. Dance and theatre festivals bring people together, and everything happens in 3-4 days. This is why I like dance and theatre festivals, especially dance festivals as the works are not anchored to language. Do you recognize this experience of community experience?

BOŽENA:
I would like to get back to one of my already given examples. It is the performance ID:D&G. Choreographers Marius Pinigis and Mantas Stabačinskas were talking, in an interview, about the process of creating their work. Festivals actually pushed them to present the performance and not to narrow the horizon too much during the creative process. The festival Bičių sąskrydis 5 (5th Rally of Bees), that takes place in Vilnius in the autumn, pushed them to create and to show the sketch of the performance. Later, in the spring, New Baltic Dance 2014 pushed them to present the whole dance performance, not only a sketch for it. After the premiere they made some changes in the dramaturgy and the choreography, following the comments they received at different festivals – including comments from the head of the Edinburg International Dance Festival. It is a perfect example of the way community experience, the concentration of dialogue and exchange at festivals, can influence the performance.

And what about performances that are not even presented on festivals? Do you think their process of development could still be quite the same? Who influences them and how? Are they less lucky, or maybe more lucky as they are not distributed by festivals?

MAX:
This idea of artists having to compromise in differing ways and getting cross-curated by festivals is for me a very stimulating idea. You did not say it would be only negative, but claimed that it might have some potentials too. In the end I liked your thought about the way we need to compromise everywhere. Festivals are maybe just one form of that. Seen from a scholar‘s point of view the education programmes that festivals have – I have been lecturing on 6 different ones – have forced me in a very productive way to meet professionals and sometimes even broader audiences. I have a feeling that discussions are often really good, both spontaneous and philosophically challenging at festivals, much better than in visual art biennales or at public talks organized by permanent exhibition / performance sites. Talks in visual art events are more stale, somehow. Maybe the long tradition of having talks in visual arts has produced a tight, traditional format.

But I like festivals. I have even started to think that we should quit having conferences of theory, history and philosophy of arts, and rather have festivals. What this would mean for us is a bit unclear to me, but I‘d like to try this out. And maybe even this text should be presented at a festival, performed by us – reading it loud from a paper? I think it would be experienced in a different way. Let‘s try to sell the idea to some festival?

BOŽENA:
I am more positive about changes in the process of creation that has been stimulated by festivals. But I agree that festivals are also sites for compromising. Festivals themselves are also looking for development. And choreographers who decide to stand against the festival rally, to show the disadvantages of festivals – they would be very interesting and useful for festivals. But I haven’t seen anything like that. I am talking about a performance which would be the opposite of the performance (not Lithuanian) I mentioned, the one on how to act at festivals, asking “what are festivals?”… It could be in the style of e.g. the Lithuanian piece Contemporary? It was presented at New Baltic Dance 2014. It is an ironic dance performance of Lithuanian contemporary dance, and the way it is developing.

And of course, discussions on festivals… I believe we need them. We’d need one especially on a theme like this. I am in – to stimulate the discussion about the consequences of festivals, and just where it all happens!