Austėja Vilkaitytė presented her piece External Sensations on the 24th of May. It felt like the spirit of the New Baltic dance festival was still present in the air at the foyer of Arts Printing House. Nevertheless, it was easy to notice how different the crowd was. Predominantly young and trendy youngsters were among the spectators, most likely familiar with Austėja’s previous creations. Also, quite unexpectedly, very few people that I expected to see at this premier actually showed up. 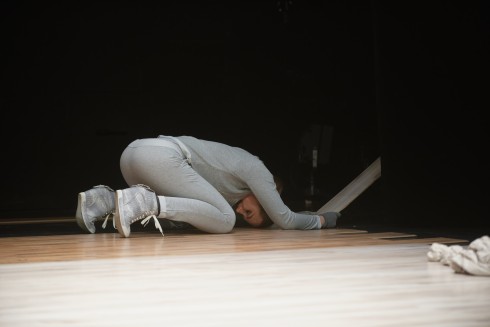 As a matter of fact, this was my first encounter with the work of A. Vilkaitytė. However, her ideas and interests were circulating in social media for quite a while as a form of choreography as an expanded practice. A. Vilkaitytė’s Facebook feed became a space to communicate the material she worked on. Therefore, after inevitably gaining knowledge about her work (how great is that?), a certain expectation was definitely present.

I was walking up the stairs of the Arts Printing House when I heard loud music coming from the black hall, so I guess it began there. Recognisable beat, recognisable song; I couldn’t help but bounce into the space. I saw a semi-clear projection of the computer screen and YouTube streaming the song Sweet dreams – Ibiza summer mix.

Five women greeted spectators in full make up, high heels, brands and prints, tight joggings which outlined their feminine silhouettes. One could immediately get a sense of aesthetics which would continue throughout, however even though it was easy to recognise, it kept being hard to name. Is it kitsch, trash, is it just bad taste or some peculiar subculture, is it trendy and cool or rather anti-trendy and anti-cool? 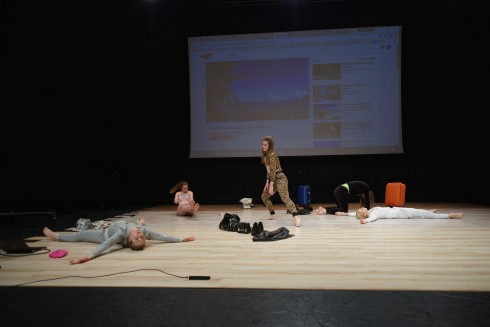 This uncertainty in naming made me wonder about the form of gentrification/development that’s relevant in a modern Lithuanian context: change is taking place, entertainment is playing a more important role, while fashion and the food culture are shaping our sense of identity, especially for the youth in the capital. This rigorous shift in the value of particular processes which influence our way of living made External Sensations no less than perfect in being an acute reflection. Throughout the performance I kept on wondering whether the work, both aesthetically and choreographically, is already in the past or is still in the future.

As the performance was starting, dancers were busy putting the floor down, engaged with their actions, insisting on the neutrality of their presence. It soon became clear that we won’t be entertained, we will be facilitated with an experience. 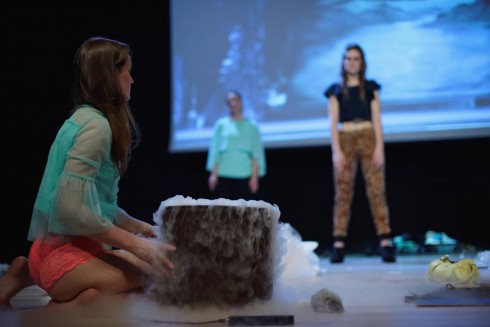 As the choreographer explains, she was interested in putting something that’s usually referred to as performance art into the black box. As an example of what changes going from any other space to theatre, A. Vilkaitytė worked the coulisse by playing with the notions of visible and invisible, unlike a performance happening in the gallery where performers stay there once present in the space (in most cases). The black box invites purification, emphasises the detail, the colour, the form; it sustains a sense of image. That’s completely opposite to other performance spaces which are typically loaded with architecture, objects, often packed full of noise. The role of a spectator at the theatre is rather familiar to us, we hesitate to leave and we’re not allowed to talk or to use phones. One could say, we are not free. So how come External Sensations still feels more like performance art in a theatre than a dance performance?

This is exactly where the tension begins. We ought to stay engaged with something that appears as unengaging in the traditional sense of theatre as possible. External Sensations has poor dramaturgy, no development, very few special effects and very little dance steps. Coming across as something radically other, this experience is by no means guided but rather loose, minimally spectacular, sometimes uncomfortable, sometimes sad, at times way too long yet incredibly rich overall. Describing what happens during the performance in terms of materials and the actions done with them seems in vain since my memories of it prominently lost any order or shape. Pilates transforming into sex, from lousy neoclassical dance to people gazing into each other’s eyes, from a smell of bad perfume to self-made smoke… I fell asleep, I cried, I thought of my hometown, I remembered the first time I had a conversation with A. Vilkaitytė and it all felt right – I was the one who shaped my own amplitude of attention. 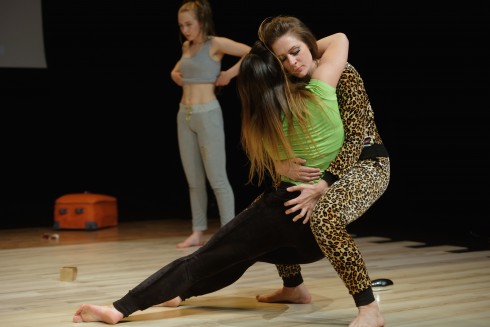 If I had one word to portray the problematics of the piece, it would be “marginal”: something located on the outside, not included into a general view. Marginal clothing found in the marginal parts of the fast-developing city is perhaps the most obvious way of using this adjective in relation to External Sensations. Misspelled high fashion brands on velvet trainers, fake perfumes, hair extensions, funny looking little bags. I couldn’t determine whether this marginal fashion is a culture in itself and the quality of drag present in the performance is therefore a form of cultural appropriation. Nevertheless, if cultural appropriation was used here to create space and spark talks on something that’s excluded, I believe that A. Vilkaityte definitely succeeded in it. 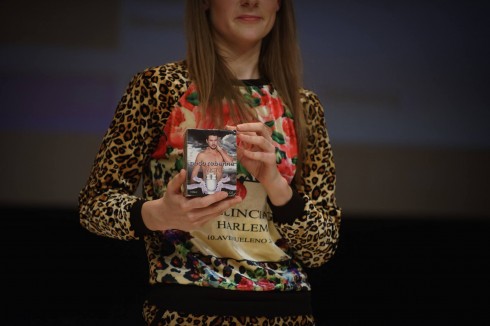 What makes External Sensations so prominent is the way it manages to touch upon the marginal from very diverse angles, femininity and its often-dismissed expression being one of them. Women who are sexy, funny, provocative, ugly, horny, sad, daring, exposed. Celebrating vulnerability and appearing as different archetypes, constantly balancing between just being and doing. These women figures make us remember a teenage daughter of a neighbour, a lady that sells nail polish in the market, one of our classmates from school, someone’s mom, a group of women drinking cider in the park and smoking illegally imported cigarettes and so forth. Engaged in some humorous form of productivity directed towards self-care, these women form a landscape, an ever changing image, a screen saver injected with sensuality and nostalgia. It’s sisterhood with a slight hint of egoism, care and softness in combination with aggression and force, a precarious dreamy state juxtaposed with strong determination. 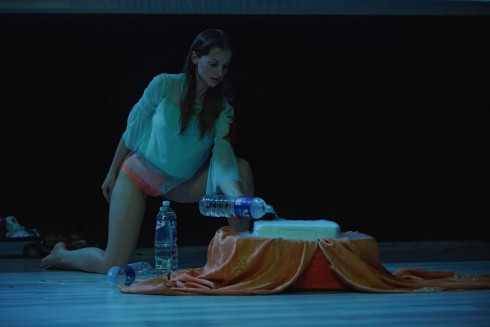 And even though the work is not about a particular something or someone, it inevitably comes back to the author. Is A. Vilkaitytė a marginal choreographer in the Lithuanian contemporary dance scene? Yes. Her works are extraordinary and propose a completely unusual mode of spectatorship for the audience. This performance, maybe even without intending to, questions almost every element that the platform of contemporary dance engages with, including skill, dramaturgy, duration, choreography and a sense of the choreographed. The latter makes us question whether what we see is improvised. What are the parameters of this material developing in real time and how does the order of these events influence the meaning of them? A. Vilkaitytė juggles these notions and simply creates something else, something that doesn’t fit into the limits of form. External Sensations is a piece that produces knowledge about dance in ways that aren’t determined yet are just made available. It doesn’t reassure us by supporting the current image of the dance scene, it’s rather trying to expand it, confront it. 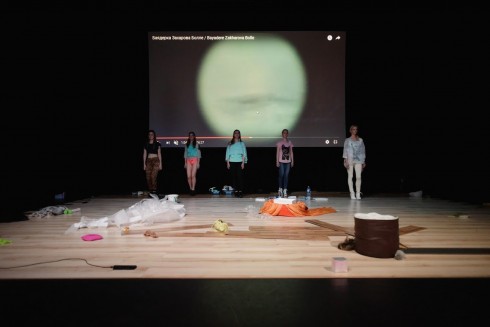 The artistic value of External Sensations might not be as crucial for any other context as it is for the context of Lithuania. This work doesn’t help us with our struggle to define what contemporary dance is but it definitely conveys what it can be.