Perhaps when attending a performance which is posited as a contemporary dance, each of us is looking for a different experience. For some, physical excellence and virtuosity of the dancers play an important role in valuing the spectacle as such. For others, there is a need for emotional content which justifies the use of movement as an expressive tool. Moreover, there are the ones attracted to humor or a certain form of entertainment in dance which borderlines between the genres of physical theater and standup comedy. Certainly, there is no need to discredit any of these desires, but it might be important to understand how the needs of the audience are entangled with the intentions of choreographers. To specify, how certain dance works allow for specific modes of spectatorships to be possible and impossible, thus how the viewer and the facilitator share the responsibility for the production of discourse in a certain field.

I believe that through this writing I am representing the spectrum of spectators who attend dance   with a desire to experience thinking. We are excited about unresolved problems and difficulties as our aim is not to understand and conclude, but rather to come along with the artistic proposal and bring it further. This is how and why through analyzing the work of Vilma Pitrinaite SOMAHOLIDAYS, I will try to understand choreographic mechanisms which allow for the latter experience to be possible. 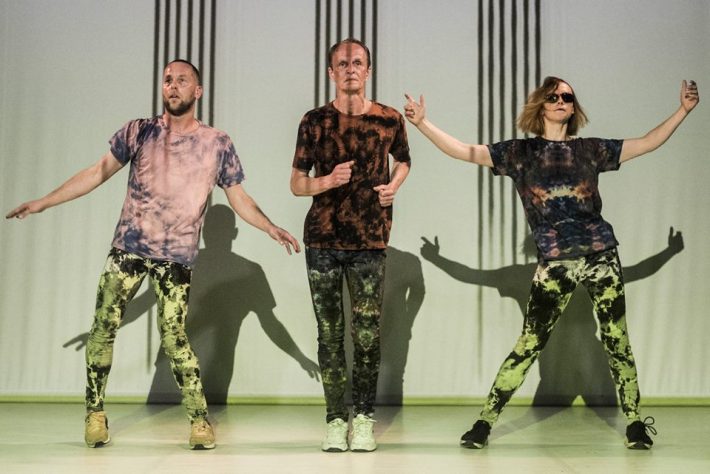 “An artist’s work is nothing more than a proposition. The term proposition does not induce anything holy or considered as one and only truth but a potentiality for action. Both proposer and receiver are equal in front of it.”

If one was to think concretely about what is being proposed in SOMAHOLIDAYS, structural aspect are an inevitable fact.

The work is divided into three concrete parts of material – the first one is a short epilogue video, the second one is the main dance act and the third one is prologue video. We encounter the same characters in the film as on the stage, thus it feels like we are guided through a loosely scripted narrative. In this narrative three agents share a determination to produce (work, state, situation), which creates a sense of commonality among them. We understand that they are entangled in sets of relations which become explored as the performance unfolds. 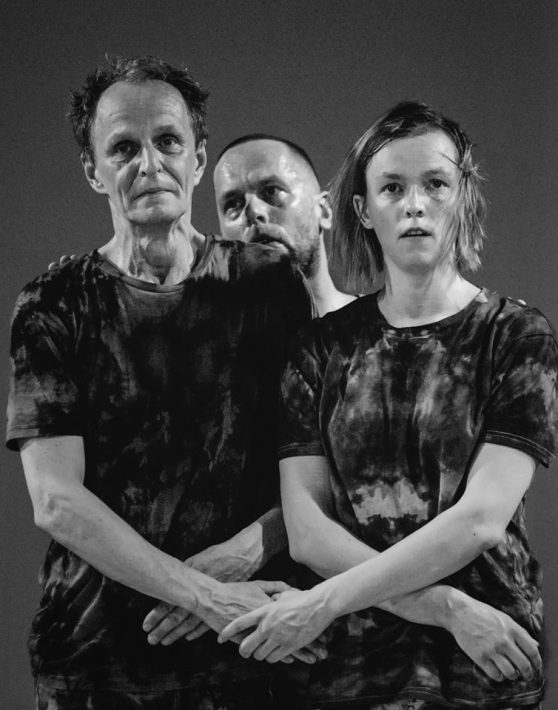 Primarily, the work confronts us with slightly cheap and kitschy aesthetics, which can easily appear as simplistic. At first glance, we seem to witness an internal joke, which has no further impact than being itself. However, we soon realize that by exactly not being what it seems, the work gains discursive capacity. Curiously, in SOMAHOLIDAYS complexity is like a ghost, whose presence we feel as the primary image decomposes into something we are not able to recognize and grasp.

How exactly this complexification happens and by which means?

As mentioned earlier, the work explores what does it mean to collectively create, produce, organize, thus offering tension with the title of the piece SOMAHOLIDAYS. A desire to escape the work and repose, become a new mode of production which guides us into unknown forms of care and solidarity.

Both videos are filmed in the idyllic, green landscape on a sunny day. The performers are somewhat discussing their plans of resting and/or working. The use of specific language in relation to labor becomes very present in the video. It is about having things done. A type of self-organization familiar to many of us – how do we create the most efficient working conditions? Or can we be efficient at all within the increasingly inevitable precariousness of nowadays?

In the main act of the performance dancers engage in a ritualistic, continuous dance supported by loud music with 120 beats per minute. The reason why I allow myself to call it a ritual is the presence of transformation within it. The space, bodies,  and borders between a private and public transform throughout the dance. What in the beginning seemed as an individualized club dancing, suddenly becomes a hallucinatory, intimate trans in which bodies mold into dysfunctional collaborations. Everything done by performers is over the top, but utterly sincere. Layers of exhaustion, pleasure, disgust and intense kinesthesia accumulate as the music changes into recognizable early 2000’s tracks, slowly guiding the spectator into something that can be marked as absurdity. And as we realize that what we are looking at is absurd, the dance suddenly stops and leaves us with a slightly unresolved desire for culmination. 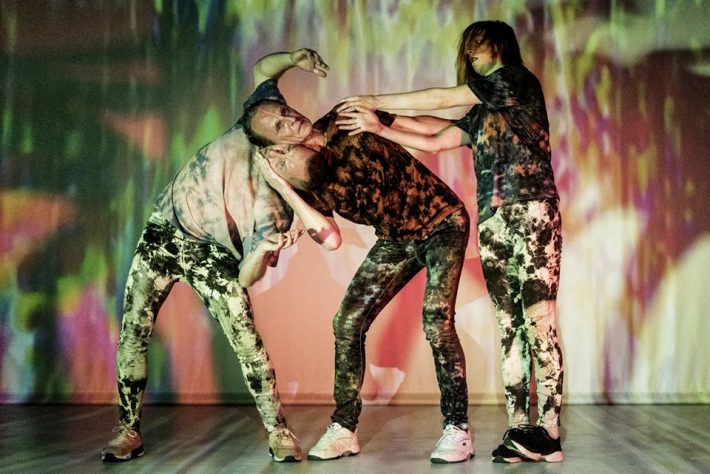 The dancers are dressed in a current fashion trend of tie-dye that points towards psychedelic, acid house era and self-made design. Although the outfits are rather uniforming, they contribute strongly to the way physical and emotional properties of each performer transition from personal into joint. Despite that we never forget their personalities, as we clearly notice the difference in their approach towards the movement, musicality and collaboration that allows us to see multiplicity within a rather homogenizing set of choreographic operations.

Much of my personal appreciation for SOMAHOLIDAYS is in its transparency. It is clearly a research-based work, at least because as a spectator I recognize that in the act of performance I get to see only a selection of materials which is specific and thorough. Despite the questionable order of events, I recognize choreographic/dramaturgical choices at place, which makes me curious and interested in the process behind it. 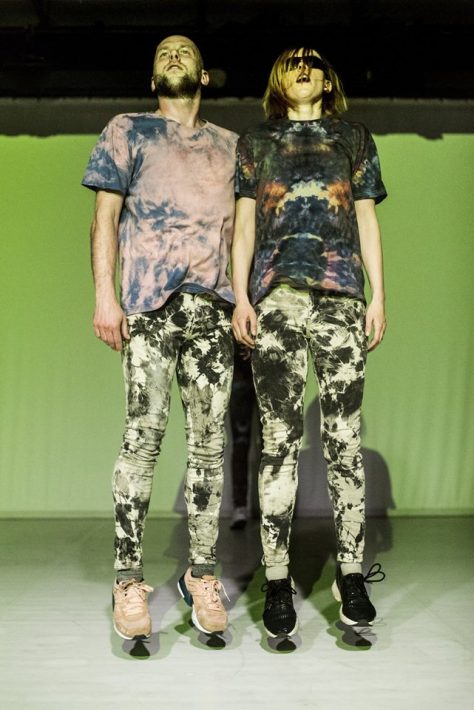 Finally, I leave the theater engaged in thought, questioning every single aspect of this work. Could things be done differently? The proposal offers space for active spectatorship, which I believe is crucial. Because our job as audience does not stop neither with the applause, nor with a small talk in the foyer, it continues and transforms what we see in the theater into new forms of knowledge.

The quote is taken from A LETTER TO THE SPECTATOR