“The program unveiled Lithuania as a Baltic driving force for performing arts.”- says Elia Liloff, the director of Bulgarian contemporary dance festival One Dance Week, where special program Focus Lithuania was presented this October in the city of Plovdiv. During the 11th edition of this dance forum, there were three well known Lithuanian dance pieces performed: Godos by Kaunas Dance Theatre Aura, Game Over by Vilnius City Dance Theatre Low Air and Contemporary? created in Arts Printing House by Mantas Stabačinskas, Agnė Ramanauskaitė and Paulius Tamolė. 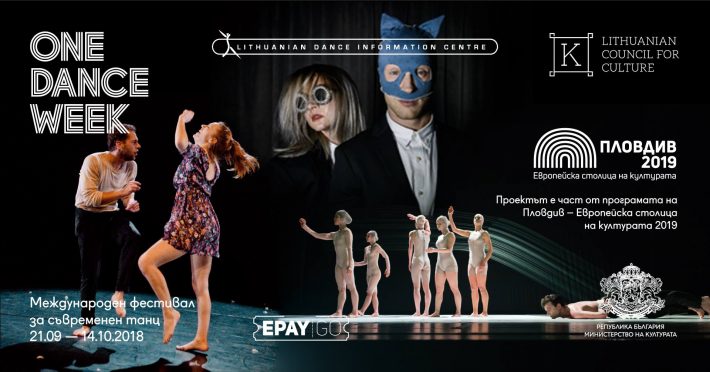 Focus Lithuania program, presenting Lithuanian contemporary dance, took place during the closing weekend of the festival and, according to festival’s director, revealed the diversity of the Lithuanian scene and its young inspiring generations of dance artists. “Focus Lithuania means a lot. Audience in Plovdiv could perceive the rapid development of Lithuanian contemporary dance – with its traditions and collaborations, with its wide range of dance techniques and themes. We could see myths, technology, virtual realities on stage, and a great sense of humor and irony, too. This growth along with the inclusion of artists from all over the world could be a great example to follow for many Bulgarian artists.”- Elia Liloff shares her experience and adds, that it is definitely not the last collaboration between the two countries – the interest in Lithuanian art has increased and it will certainly inspire some future projects.

One of the authors and performers of Contemporary? Mantas Stabačinskas says he is happy about the successful performance and an honor to dance in the same festival with a very important personality of the dance world as well:“It just so happened that the festival was opened by a world-class celebrity and wonderful artist Dimitris Papaioannou and closed by us. Even if we did not see his performance, the feeling of dancing on the same stage as him is unbelievable.“ According to creator of self-ironic piece about the contemporary dance, he was also pleased by the comment he received after the performance from one of the festival team members, saying that it was the best performance he had seen at the festival and it should be watched by all the contemporary dance artists in Bulgaria.