The audience has taken their seats, the whispering and rustling quiets down. The stage is empty. Suddenly, a timorous voice emerges from the spectators, stops, and then timidly tests its strength again. The performance “What Do I Cry For?” has started. 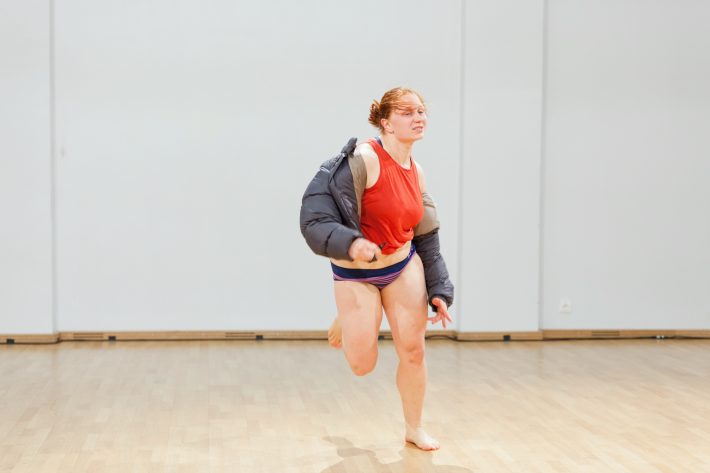 Experimentation, anguish, and solitude. Grėtė Šmitaitė is standing on the stage solo, using almost no background music nor (apparent) added stage or light design to the existing space. She has only her own body, mind, and voice to keep our attention on her. This vulnerable position accentuates the feelings of uneasiness and isolation of emotional pain. We are taken on a journey as intimate as the sad-faced doodles on the pages of a personal journal, drawn from raw emotion and illustrated with teardrops. We are taken to the land of uncertainty with a cloudy mood and a chance of rain. 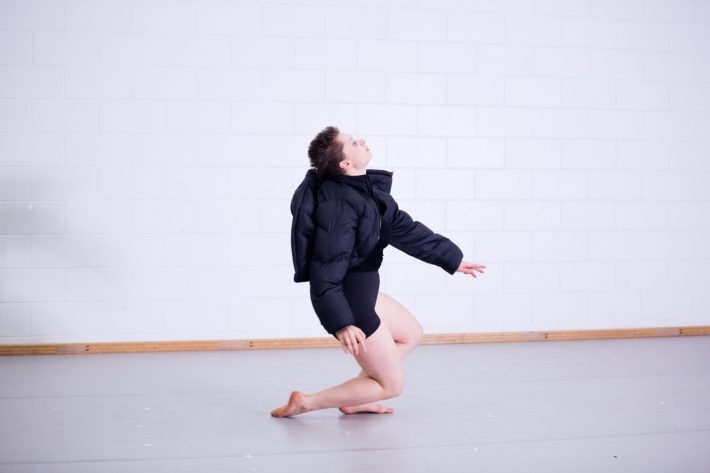 Nevertheless, the performance is not gloomy. Instead, it can be described as an expedition of an anthropologist through the jungle of confusion to study the mysterious tribe called “emotions”. It’s not an easy task to understand your feelings, let alone the feelings of others. Crying can be the local guide to point out where the tribe lives, but then it leaves the anthropologist on her own to enter the village and to get to know the inhabitants. That said, crying is a deeply carnal experience with very little to do with analytical thoughts. Strong emotions are first felt in the body and only later they can be recognised (and analysed) by the mind. Crying can hit you in the head, maybe clearing it like a thunderstorm on a sizzling hot day when the air stands still, or on the contrary, stirring up the mud from the rivers of your mind. Either way, the post-concussion state offers a starting point to recognise that something is wrong, and then… you can either deal with it or sweep it under the rug of daily routine. 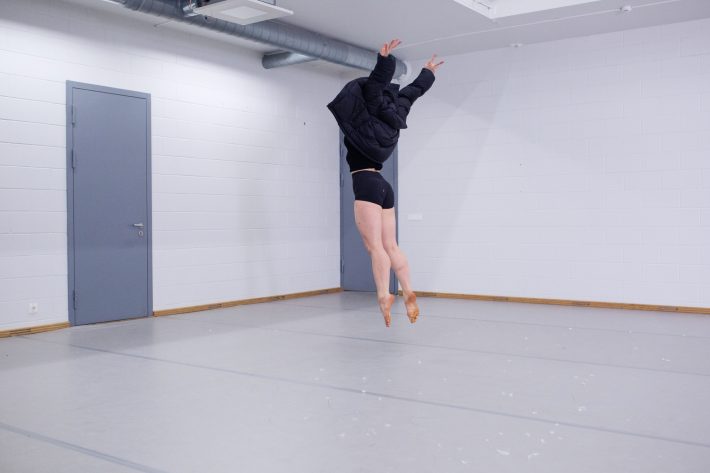 The state of hysteria becomes particularly graphic as it can almost shut down the thinking processes. In this sense, hysteria becomes, paradoxically, almost a meditative state, where time loses its meaning. Forcing any kind of activity while crying is almost an impossible task, and yet G. Šmitaitė goes through a variety of scenes sobbing, actively fighting against the forces pulling her down. The persistence demonstrates the power in fragility, and tests the limits of a body drowned in sadness. 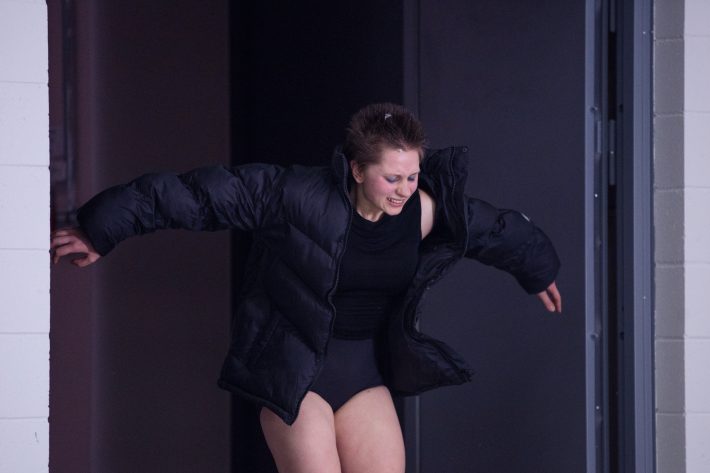 How to communicate with the inner tribe of emotions? There are several ways, but the “anthropologist” on the stage floor opens her mouth and lets out her voice. We can hear confusion, sadness, panic, and resignation… The sounds remain mostly incomprehensible, except for a few words in English, and a piece of text recited in Lithuanian. Accompanied by the bewildered, begging gaze of the performer which is mostly turned upwards or to the audience, the need to communicate something, to reach out to someone (be it a supreme being or another human) and not being able to do it becomes apparent. In this context, the words in Lithuanian become especially symbolic, contributing to the feeling of miscommunication. I wonder how the same episode would change the tone of the performance in Lithuania, as it would not only be understood, but would also carry a meaning inaccessible to the Estonian audience. Here in Tallinn, the frightened, feverish talk in foreign language adds to the image of a shivery adventurer deep in a jungle, lost on her quest. 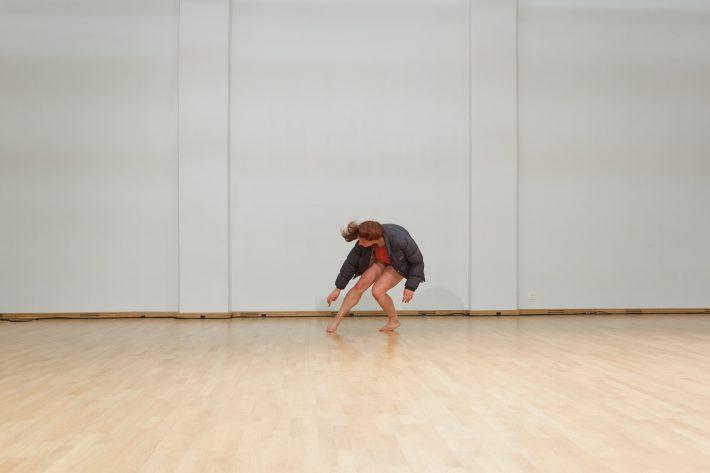 What can one do when getting lost on the expedition to their mind, desperately longing to be understood and yet failing to communicate one’s experiences? Can one escape the suffocation by merely opening the doors (figuratively or literally)? Can one find solace by ignoring the ongoing process of exploration and simply leaving the place? And does exiting the situation (like fleeing the room during the performance) help, or  does the cry  still  slip out  elsewhere? G. Šmitaitė examines the limits of given space and  is hesitant  to return, both  mentally and physically.  The threshold  of  the  performance  room  seems  to become a gateway to a difficult mental state. Nevertheless,  she  does  return,  and  continues  the demanding work of confronting emotional pain. 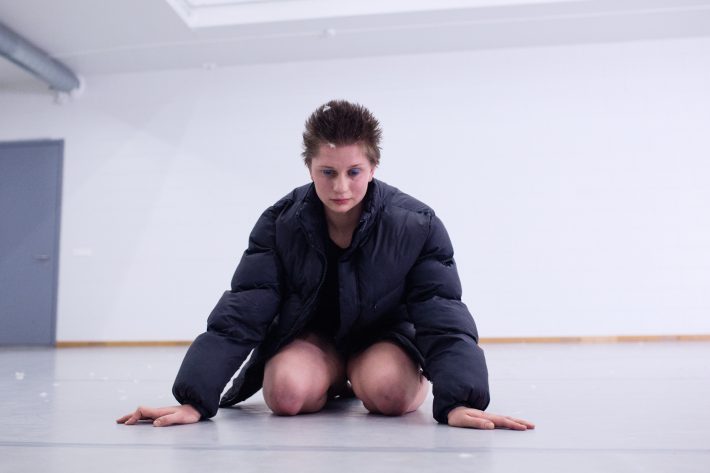 As humans are social animals soaked in culture, even something so physical as crying has cultural connotations. Who can cry, and when? From an early age, boys and girls are taught to express their emotions differently – boys should hide their tears if they don’t want to be humiliated (!) by seeming feminine, and girls should channel their “masculine” emotions such as anger into crying. Crying is still to this day believed to belong mainly to the female domain. Therefore, bringing crying from the private sphere (which has been thought to be women’s realm as well) to the public (i.e. masculine domain) can be seen as an act of rebellion against this slowly changing status quo of channelling one’s emotions according to gender. “What do I cry for?” creates a public space where it’s okay to cry, loudly and proudly, illustrating the strength of vulnerability. After all, facing one’s own feelings and dealing with them is one of the signs of ultimate toughness, no? 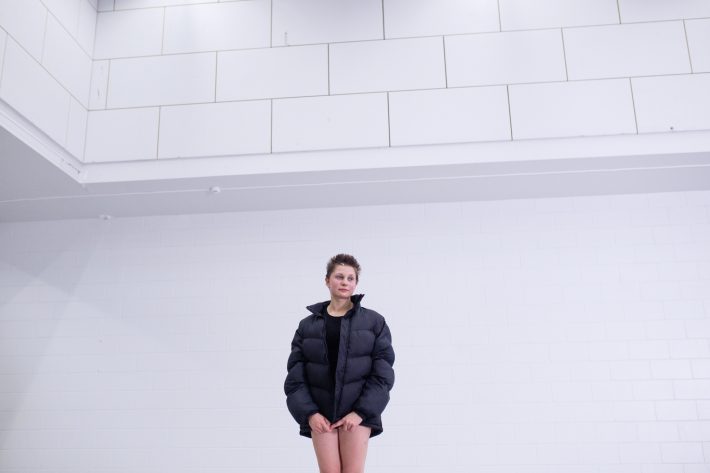 Grėtė Šmitaitė has managed to conduct a research on crying with a minimalist yet raw power, adding the clever use of existing space and an expressive manner of performing. And there’s no dramatic end to an emotional journey, like in real life. The lights don’t suddenly go off, marking the border between the event and everyday life, nor does the performer bow victoriously. Only a nervous smile breaks the tension and we’re free to continue the hard work of coping with our emotions elsewhere, but with the help of a thunderstorm which has cleared the air (or muddied the waters) of our minds. For now. And who knows, maybe we’re now a little braver to let the mask of “I’m alright” fall in public, if needed.

Photos by Kris Moor from ‘What do I cry for?’, choreographer Grėtė Šmitaitė. STL Tallinn’

The performance in Lithuania will be presented at 3:30 pm. 7 April 2019 in ‘Arts Printing House’ Vilnius.