Report on the EDN Encounter at the Baltic Dance Platform, by Annette van Zwoll.

Last May, the very first Baltic Dance Platform took place in Vilnius, Lithuania. It was embedded in the 23rd edition of the international dance festival New Baltic Dance in Vilnius and represented contemporary dance of Lithuania, Latvia and Estonia and enhanced networking, collaboration, and educational activities. Almost sixty international guests from all corners of Europe, plus delegates from China, South Korea, the U.S.A and Israël, immersed into three days of performances, pitch sessions, presentations of international networks, and of course informal encounters and gatherings.

The seven selected performances were made by independent choreographers from Lithuania, Latvia and Estonia. A platform linked to a geographical area makes your brain look for connections to say something about Baltic dance in general. However to be able so say something generic and truthful, more knowledge and experience of the scene is needed.

But what can I say about the specific selected performances? Some showed an interesting fascination for structure in combination with a strong esthetic, like Boléro – Extended, that ingeniously deconstructed the Boléro with use of a Cello Quartet. Kaunas Zoo examined a world full of decadence with an intriguing composition in which the 10 highly skilled dancers would form and reform again on a pumping (live-produced) beat. Although enticing at the beginning, the content seem to be subordinated which made me retract after a while. Future Freak on the other hand wanted to address many big and important themes, like climate change, but due to the fast amount of eclectic imagery and esthetics I couldn’t hold on to it. 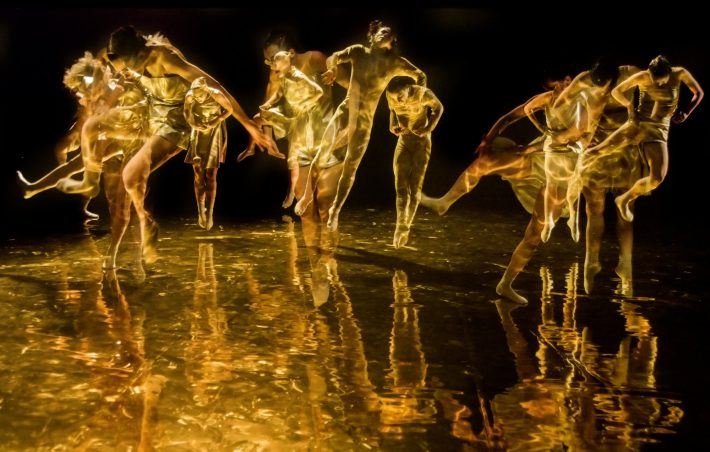 Other performances were based on a personal experiences and came from a necessity to share that story, like Bedre / Rock Bottom of Sintija Silina on the process of depression and Blank Spots from Lukas Karvelis, which I read as a personal journey on the search for gender identity. In both of the performances there was a sense bravery that sticked with me for a while.

I mostly appreciated Imagine There’s a Fish from Sigrid Savi, an absurd ode to the power of imagination, while at the same time a critical comment on the contemporary dance field (which of course, we as viewers but also she as a performer, are part of). It was the first time at this platform that I found myself laughing during a performance. What a relief to have some lightness! 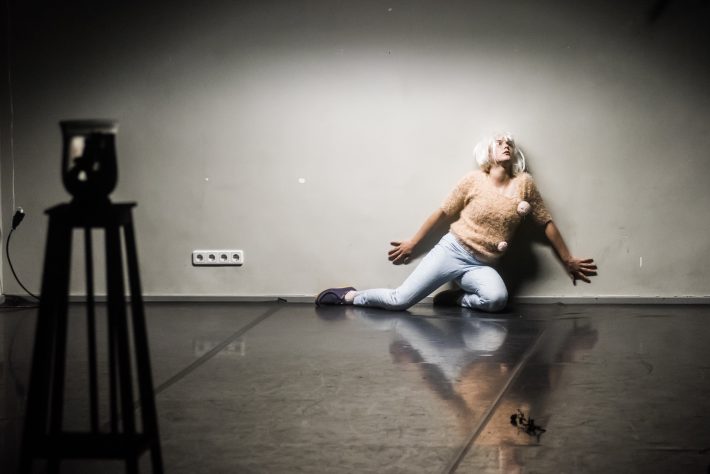 The evening performance Fluids (actually made by a Finnish collective and performed by an Estonian dance group), brought that lightness as well with four dancers entering a slippery and sticky floor covered with lubricant (or that’s what my neighbor thought it was). Although maybe a bit too light to my taste (a tricky balance it is!) it surely was a good ending of these three days platform

Pitches or showcases are usually the most uncomfortable setting to get to know artists. The imbalance in the dance sector between artists who would like to be acknowledged, appreciated and invited, and programmers who only have limited possibilities always becomes painfully tangible in such contained settings. Usually, this uncomfortable power play is not addressed but the Baltic Dance Platform had a trump card: B&B.

B&B consists of two local dancers forming a disarming duo with no respect for hierarchy nor status. Having looked up every delegate online, they out of the blue would address you as if you’ve been best friends for ages, share ‘personal’ information gathered from Facebook and charmingly advise programmers to buy certain performances. They openly laid bare the market situation by hypnotizing us with the words ‘to buy….or to buy….’. It didn’t diminish the reality of the structure but it did acknowledge and name the situation.

The pitches themselves showed a big variety of themes, aesthetics and size, revealing again how international the contemporary dance field is. There were collaborations (and relations) from people from all over Europe and many choreographers studied in countries outside of the Baltic context. More than a fruitful context for selling the work, the pitch sessions evoked curiosity, and gave entrances to start a dialogue within the more informal moments of the platform.

On Friday 10th of May, the Global Practice Sharing Network was presented by director of the network Marýa Wethers and executive director Barbara Bryan of the Movement Research in New York which hosts the network. GPS is a platform for international exchange of ideas, processes and reflective practices surrounding dance and movement. It aims for creative innovation and a deepening of knowledge by providing exchanges and residencies between the U.S.A. and Eastern and Central Europe. Partners come from Poland, Slovenia, Latvia, Bulgaria, Macedonia, Serbia, Hungary and Russia, plus two additional partners from San Francisco and Urbana in Illinois, USA.

Together they support almost 20 artists per year. Research and performance residencies alternate with teachers residencies. What is especially interesting is the way they connect their activities to the local community: classes are open to the community and research and performances are often developed with the community. Residencies are usually concluded with a presentation open to the local audiences. International exchange impacting the local environment.

On Saturday the 11the European Dancehouse Network presented itself (and I myself was involved in the presentation). EDN aims to reinforce the dance sector’s capacity to operate transnationally and internationally and to reinforce the dance sector’s capacity to adapt to change. It focuses on strengthening professional practices, the development of audiences and the progression of the network. The network consists of 40 members in 22 countries, which share the value of enhancing sustainability and relevance of the dance through trust and solidarity.

With a new board and a new office, the network is in a moment of transition in which it develops a stronger voice within the political spectrum, on a European as well as on a local level. A new application process for new members is in the making which will have inclusivity and transparency at its core. Questions and critical reflections were shared  from the audience on the participating countries and the geographical imbalance within EDN. Although the perception from the audience that only ‘rich’ (North-Western) countries are part of EDN seems a simplification of the situation, it is true that the Baltic countries as well as many countries of the Balkan are underrepresented. While many efforts are made to diminish this gap, and many actions are still in the planning, it is understandable that for many this process doesn’t go fast enough. It was a confirmation of the policy of EDN to make additional steps to actually become a representative and advocate for the whole European dance sector.

This first Baltic Dance Platform was an intense submerging into part of the context of the Baltic Dance sector, all with beautiful Vilnius as its backdrop. Extremely well organised and welcoming this platform was one to remember.

And it will not be the last one! The second edition of this platform will take place in Tallinn in 2021.