Chiromancy or palmistry (also known as palm reading) has its origin in ancient India. Ideally both hands should be read: the left hand shows potential, while the right presents how you have dealt with that potential. Shy Palms is a site-specific dance piece and the result of a collaboration between two young choreographers who both studied Choreography, Dance and Context in Berlin. Sunayana Shetty (India) and Grėtė Šmitaitė (Lithuania) developed and showed the work at Fort IV in Kaunas, Lithuania – a seemingly half-forgotten place unknown even to some local taxi-drivers. It premiered on October 11th, followed by two more shows on 12th and 13th, each time for a limited audience of seven to ten people, before the sun set and darkness fell.

Landing in Kaunas for the first time to write about the piece, I make my way to Fort IV earlier than I need to, wanting to know more about the location. I arrive when the sun is still shining. The abandoned rooms and corridors of Kaunas Fort IV hoard the cold and darkness and are home to a population of bats and histories of defence and terror. Constructed for military and defence, it was used for detention, interrogation, and execution during World War I. The green meadow that wraps around this large, asymmetrical, tetragonal building creates a significant and serious playground under a sky that shows its ever-changing moods during the three days of shows. Intelligently for a show that’s presented half outside, there is a plan B for the changing weather, and in particular, heavy downpours. Minutes after I arrive, a strong wind brings thick clouds and the whole landscape reveals a different dimension. I feel my curiosity replaced by caution and I abandon my excursion around the empty fort.

I step in the invisible labyrinth of the show, my thoughts revolving around a discussion with my host in Kaunas before the premiere, and a story about three bottles of old wine.

The story goes like this: While working in the town of Andrioniškis, construction workers drove their diggers inadvertently through the walls of an old, underground wine cellar, destroying the contents. Only five bottles survived. The workers opened one of them, and found it to be a treasure, so a priest was called to taste the second one. By his order, the remaining three bottles were preserved unopened as part of the town’s heritage. Around the table in my host’s dining room, we asked ourselves the obvious questions: If the wine was so tasty, why didn’t the workers drink it all? And what is the point of preserving the wine untouched when it obtains its value through its taste?

I come out of my thoughts and into the reality of the show. It starts with a warm introduction and an invitation to follow the light of a candle sitting in the palms of our guides (usually one of the three performers) who direct us from one scene to the next. As a ritual of beginning, Grėtė Šmitaitė and Sunayana Shetty each throw a coconut to the ground, breaking them open. A voice starts singing from the highest point possible:

Vincenz Kokot stands on a ladder balanced close to the ceiling of a corridor at the juncture of three pathways. His words fall down on us, describing a group of people, referred to as ‘we’ in the song, who cross different landscapes, and by doing so, encounter new situations. Meanwhile, square-shaped cloths enter the scene horizontally in a line through a window, slowly exiting through another, embodying the words of the song as they cross in front of us in the form of colours. To my ear, the song itself becomes a poetic map of the whole show. I imagine it is we who are the people in the song, crossing a landscape.

We are guided along the corridor to a series of six rooms. In each, an episode unfolds that experiments with qualities of proximity between the performers, their relation to the audience, and the space surrounding them. This experimentation manifests itself not only in the choreography of movements in each scene, but also by defining a clear position for the audience from which they observe the show. Although the audience moves actively through this series of events, we are still clearly observers and onlookers. And although there are moments of interaction mediated by objects who carry messages, there are clear borders shaping the limits of the interaction of the audience with our surroundings.

In the first room, the three performers Grėtė Šmitaitė, Sunayana Shetty and Vincenz Kokot stand in a line, presenting themselves to our gaze. Behind them on the wall, there is an image of a half-naked woman squatting and protecting her head with both hands. A warm Indian song fills the room, and the sound of a ukulele enters and then departs, filling the other rooms soon to be discovered. It opens up a space for the text and movements of the two female performers who come closer to us with a bouncing quality, encouraging us to imagine that the absurdities of the text they are reading out are real. They come closer and closer to us, and then, just like in the beginning, they disappear, handing us once more over to Kokot who leads us into the next room. 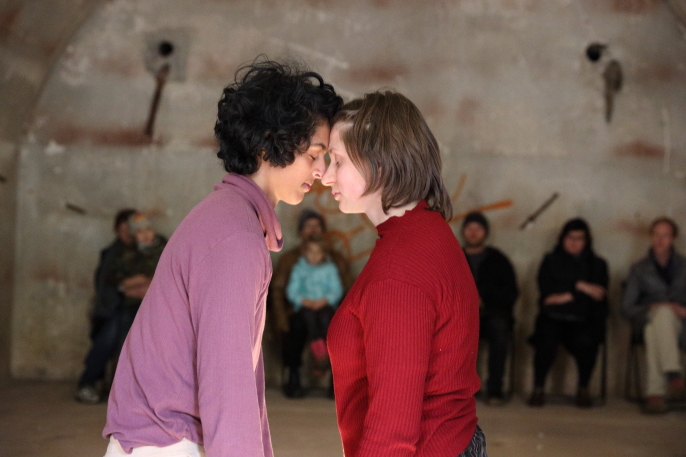 The next two rooms are activated by the concentrated movements of the performers, that, as time goes on, get gradually larger until they are bursting with intensity. In contrast, the fourth and fifth rooms are totally devoid of physical body movements. We pass through the fourth room where lights hanging from the ceiling swing in the darkness, whereas in the fifth room we are invited to interact. By pressing the button on a tape-recorder, a monologue based on part of Woody Allen‘s Love and Death’s Dialogue starts to play. As the text follows a linear direction through time, its content circulates, constantly revisiting its beginning. Similarly, the sequence and order of the scenes of Shy Palms takes us back to places we have already been to throughout the show in order to see them from different perspectives and with a different time relation. It is a dramaturgical device that enables us to see the past and present trajectories of the piece alongside the historic weight of the building. It draws my attention to events that seem to recur in history: a recreation of relapsing historicity. It engages both my objectivity and subjectivity within a short space of time, and enables me to experience, metaphorically, the condition of engaging with the now of the show’s history, and later, of observing its recent past.

These episodic, planned, and directed structures are not, however, the sole contributors to the creation of an undeniably cinematic quality within Shy Palms. Alongside the visual aesthetics of a space that inevitably reminds us of the mesmerising legacy of Andrei Tarkovsky, the last two scenes of the show that take place outside in the meadow also embolden the work’s cinematographic character. In the vastness of the meadow under the sky, wooden benches await us. As we sit, the humid air transforms itself into an endless transparent screen. It is a setting that decisively conditions our mode of participation and I observe with interest just how close the art of choreography can be to the production of cinematic narratives. Just as a camera zooms in and out, so does Šmitaitė and Shetty’s choreography fabricate depth and interplays between foreground and background. It is in this sense that I view Shy Palms as a blend of two worlds and two attitudes. It is a blending of warm moving bodies with cold images, activity with passivity, interiority with exteriority, silence with sound, and the past with a never-ending present. It forges bridges not only between mediums in the art-world, but also between art and history. 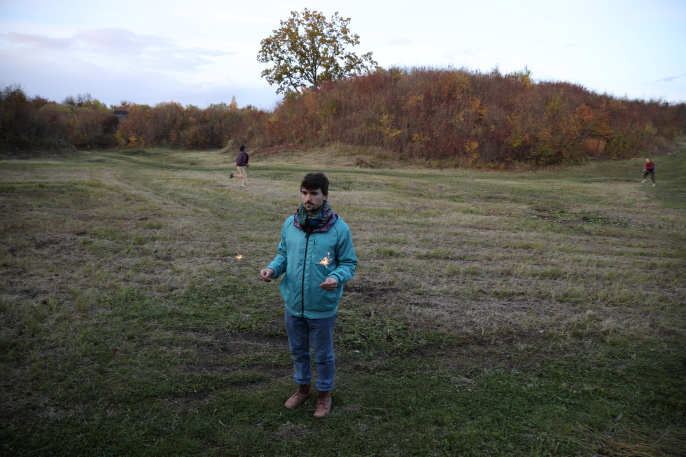 The fort, like other forgotten structures spread across the city, was born out of the anticipation of World War I. It bears part of the city’s history – perhaps not the most pleasant part. At the end of my trip to Kaunas, the image of the three preserved bottles was lodged in my mind, their significance ensured only by sacrificing access to their previous source of value – their taste. Now it was clear: I realised that their value had expanded beyond taste, replaced by the weight of the history that they are carrying. A site-specific dance piece outside of a conventional theatre space brings with it difficulties for both artist and audience alike, but it is more than worth it in the unfolding of an opportunity to view the twists of history and the pleasure that brings. As we study the history we hold in our right palms, we understand the reasons for the difference between it and the potential we hold in our left palms. In this era, this valuable knowledge lends us insight into our evolving behaviours in matters of life, love, mutuality, war, diplomacy, and peace. To be able to foretell the future, one needs to know one’s past.